Life is progress and motion. So is war. New technologies present opportunities and challenges. Those who adapt to the new conditions gain the upper hand, and those who cannot adapt are sentenced to extinction. Development of technologies does not bring peace and security – it simply changes the face of war. However, the causes of wars always remain the same. No matter how long peace lasts, sooner or later greed, fear and ambition will prevail and sweep away the ghostly wall of morality and laws… 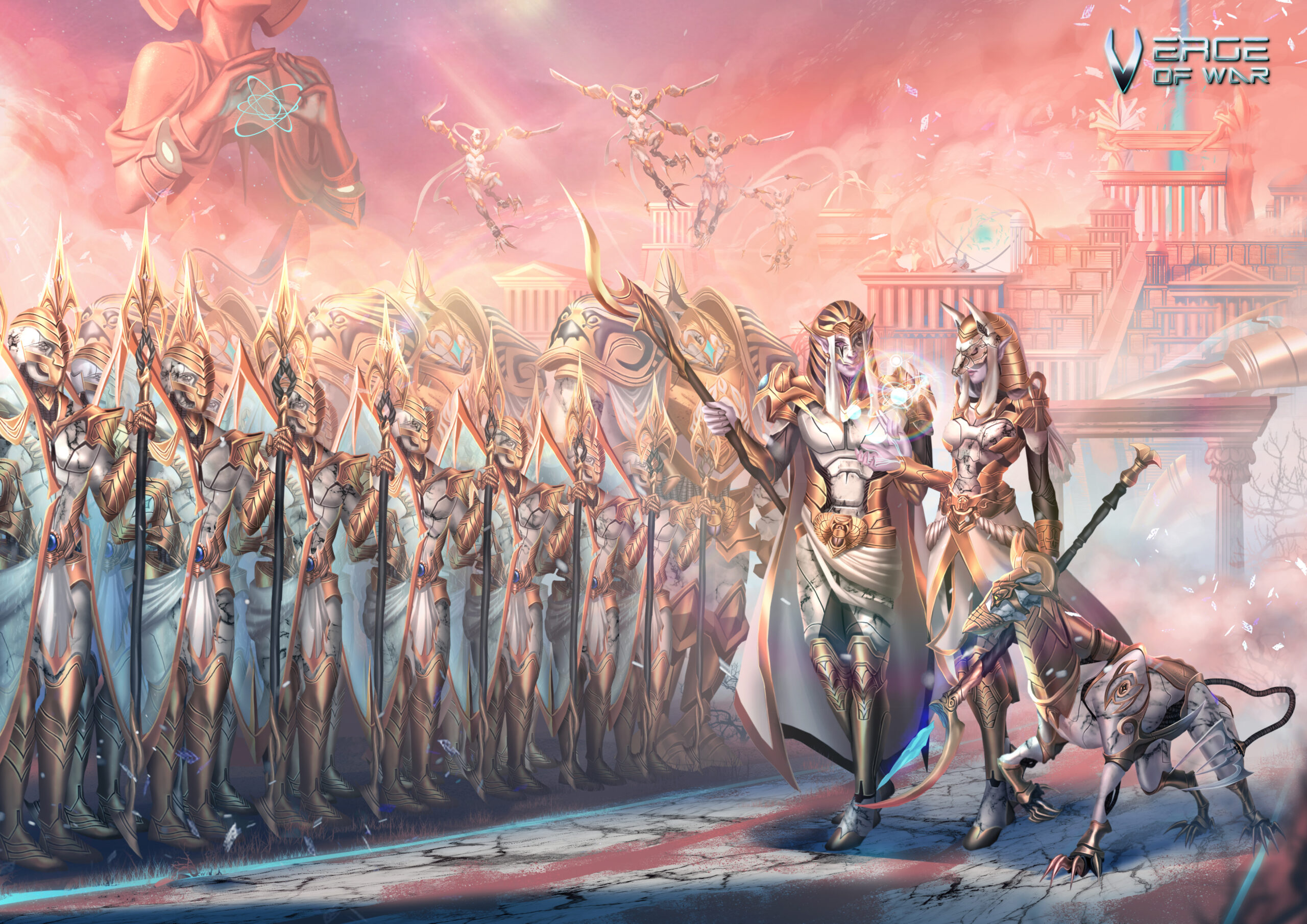 For some time the Milky Way lived peacefully and calmly. Fear prevailed.

Of the most ancient races in the galaxy there were only the mighty Asgar. A race that conquered even gravity. Mighty. Eternal. Capable of lighting and extinguishing stars. They established order in the galaxy, creating the Galactic Council, which resolved controversial issues and enabled peaceful coexistence of other races. The younger civilizations listened. But gradually the Asgar separated themselves from the rest of the galactic community, concentrating more and more on internal problems.

Eventually the Asgar lady Athene Pallas proclaimed an entire sector on the fringe of the Galaxy forbidden. None dared to disobey. Rumors spread that a famous Asgar biologist created some terrible biological weapons there…

Time passed and life went on as usual until an in fact, everyday event for the Universe: the Milky Way absorbed a smaller galaxy. And with it, a new race moved into our galaxy. The Seit. They were not accustomed to fear the Asgar and started to aggressively conquer living space for themselves. With them they brought slave races, and in the Milky Way they found new ones.

The Seit, being powerful psionics and skillful manipulators, had quickly subjugated a large section of the galaxy and began to play one of the leading roles in the Galactic Council. The Asgar remained silent. 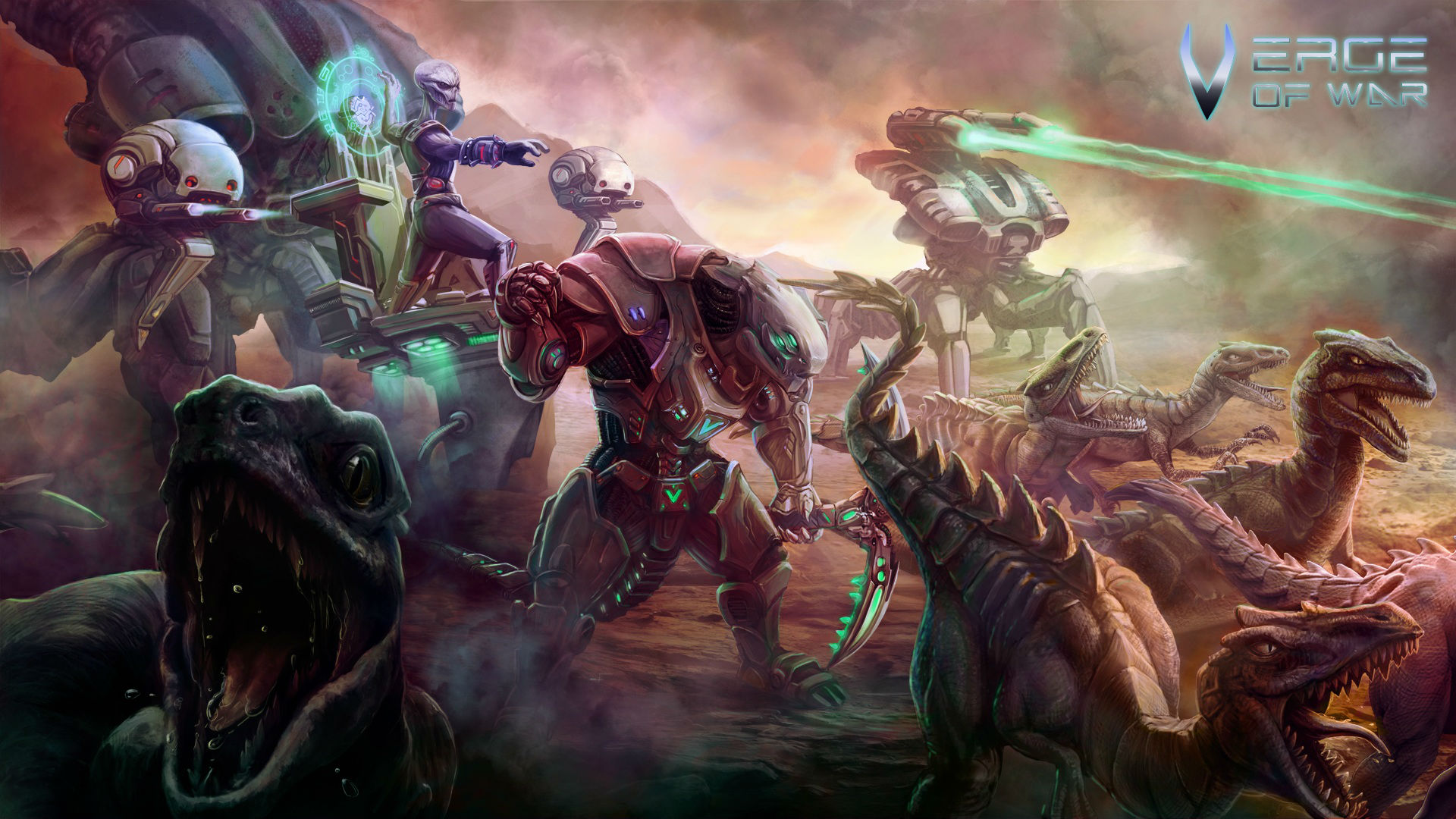 Entire species fell under the yoke of the Seit, but Asgar kept silence. They were indifferent. The directives of the Council are of little interest to those who have powerful fleets and armies.

Seeing such indifference of the Asgar, the other races decided that it was their time to realize long-standing ambitions and correct long-standing injustice. Ambitious Kja and greedy Eltofa were the first to launch their fleets to the conquest. And the rest followed. Multiple local conflicts caught fire, but then quickly came to a dead end. The forces of the sides were not enough to break the enemies, and nobody wanted to put everything at stake in the war. From time to time clashes broke out on the borders and armed provocations took place. It was not peace, but neither it was war. In such a situation the thirst for power made everyone look for the mysterious and powerful weapons of Athene. The key to power in the galaxy, as from times immemorial, as it was believed by the younger races. 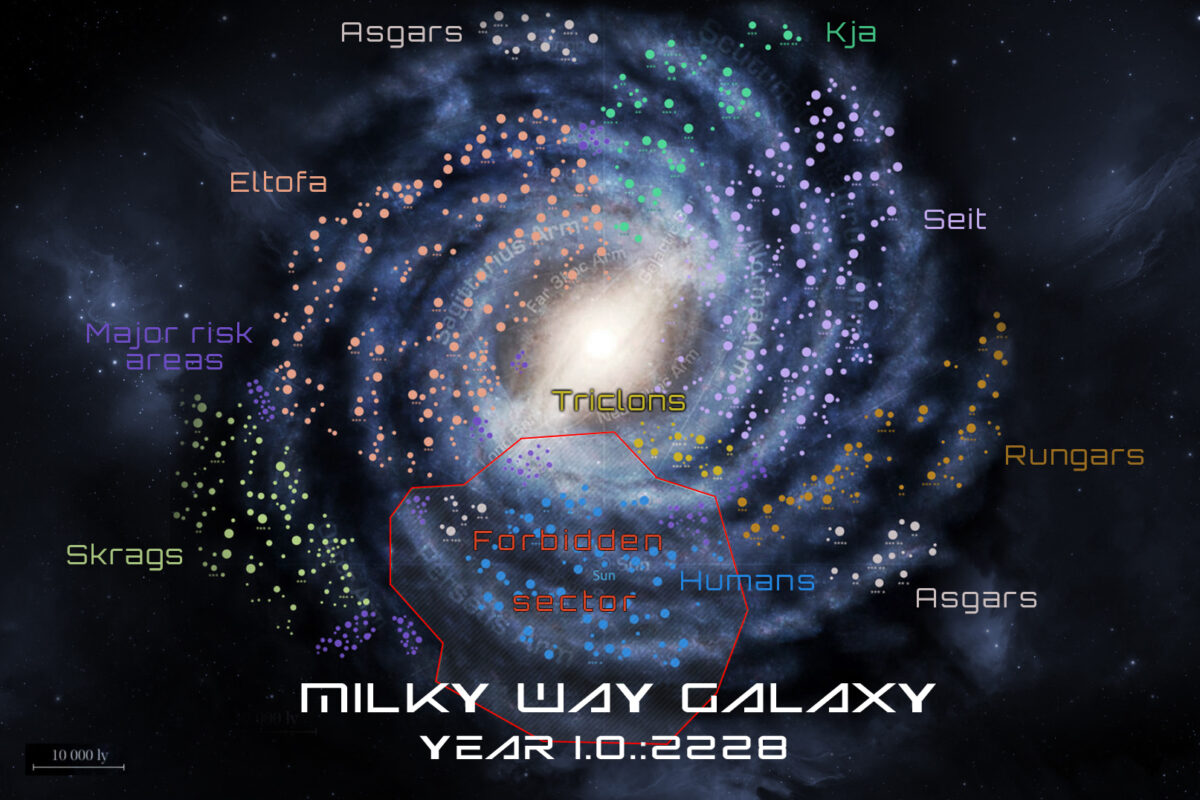 And then finally the long wait was over. A new race appeared from the Forbidden Sector, previously unknown to anyone – the Humanity. The war of the first contact between Seit and Humans stirred the Galaxy. The young human race was incredibly strong and powerful. And with the arrival of the Humans, the Asgar finally awoke from hibernation and started to act.

So what does this bring to the Galaxy? Will the new order be established? Will a new superpower rise and break the resistance of the others? Who owns the mysterious and powerful weapon of Athena?

We do not know this today. The mighty fleets of galactic powers stand a few steps away from a full-scale collision. 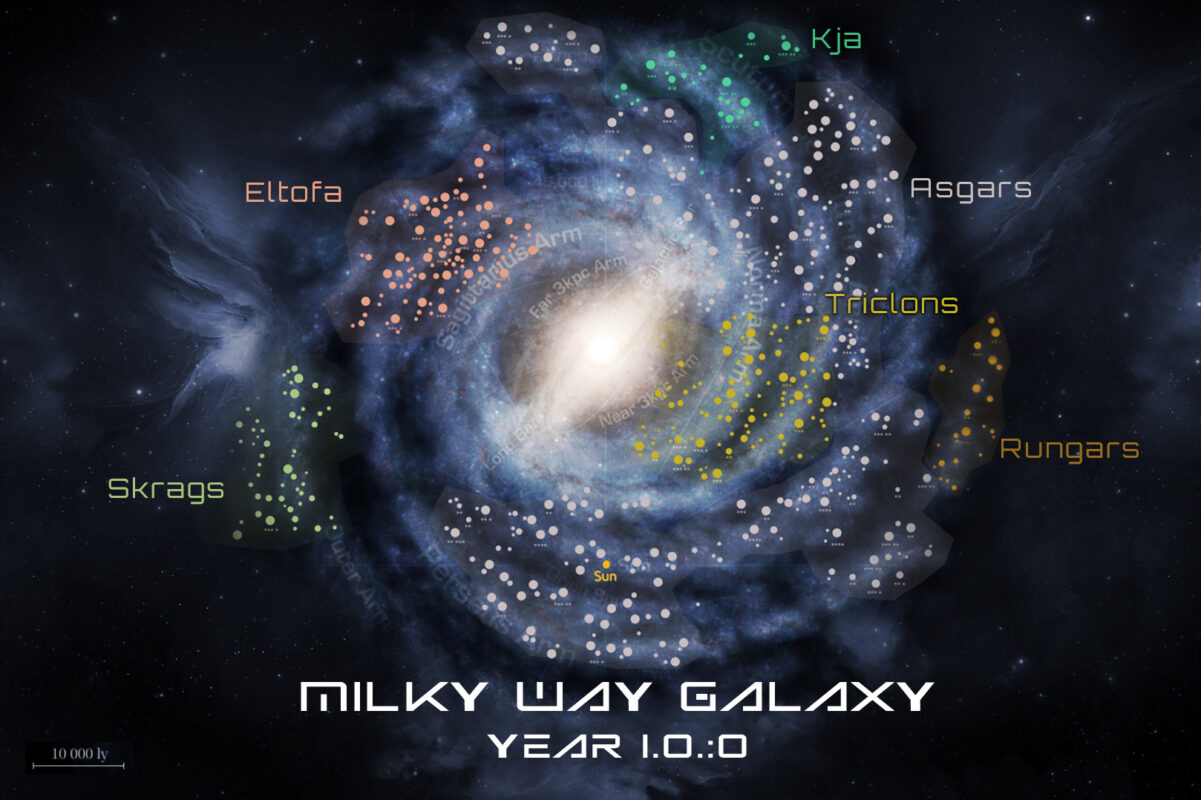 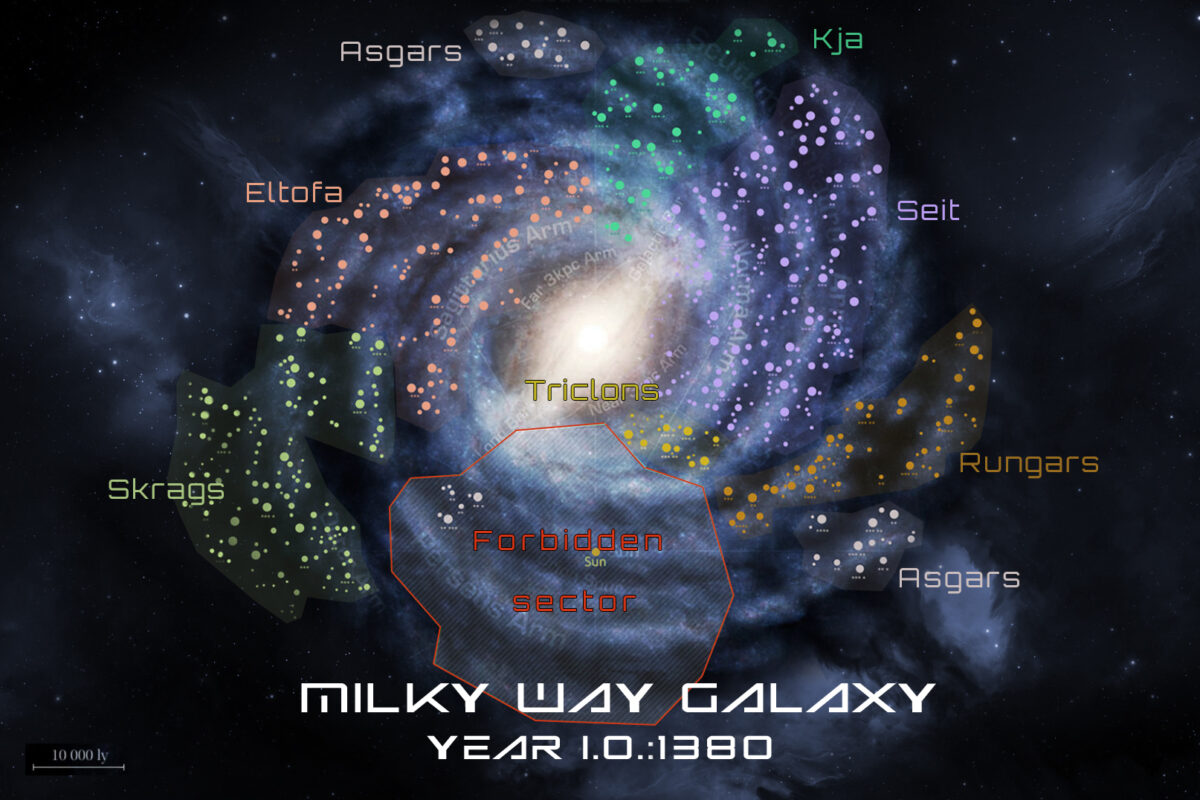 Dates are according to the Earth’s standard calendar.

The zero years. A mysterious power threatens the Galaxy’s very existence. Its appearance is named “Incursion of the Others”. Some stars begin to fade, and some are extinguished forever. All forces of the Asgar empire are thrown against the new enemy.

450 IO – The war ends in a pyrrhic victory for the Asgar, incursion is stopped, but they lose many territories in the process and their armies and fleets are nearly non-existent.

1096 IO – A smaller galaxy collides with the Milky Way. That is when Seit arrive, bringing Shorks with them.

1380 IO – Galactic Council is no more. A united Triclon state also ceases to exist and splits into isolated fragments of several kingdoms that have even less forces to resist the Seit aggression.

1420 IO – The second Skrag Trade War begins and expansion campaigns grind to a halt. All powers instead start searching for the mysterious Asgar Sword. Different races send their emissaries to the Forbidden Sector, but none of them returns.

1561 IO – The Seit expedition approaches Earth but is intercepted by Asgar ships.

1910 IO – The first records of encounters with the Dead Machines on a planet orbiting the Stolen Star.

2008 IO – Lady Athene establishes a base to block the shortest routes to Earth.

2110-2127 IO – The first colonial war where Earth tries to seize control over the separate colonies that considered themselves completely independent. A great state reform, what was an Empire on paper becomes Confederate States of the Earth headed by the Emperor. Codes regulating rights and obligations of the nobility are issued.

2180-2193 IO – The second colonial war. Only a part of colonies closest to Earth recognized the Emperor’s reign and the rest formed their own commonwealths. Several powerful unions join forces to seize power on Earth. However, selfless and decisive actions of Raymond Visioner allow Earth to emerge victorious. Humanity’s status changes.

Seit launch a massive offensive against Triclons. The last of the free Triclon colonies are devastated, and Triclons become exiles with no home or hope for the future.

2210 IO – Foundation of the Third Horizon. New colonial legislation. Forming of free human colonies. According to the Greenwal Charter (named after the colony that was the first to receive such rights), colonies receive greater autonomy in exchange for support of the human race’s unity in global perspective, and a common economic space is established. However, not all colonies agree to such conditions.

2220 IO – Events described in the “Edge of Light” book. First encounter between Seit and Humanity at outpost 30-05. Duke Raymond Visioner is victorious once again, but this victory is far from final. Seit forces retreat, beaten, but not wiped out, whereas the human outpost is destroyed. Seit also receive a massive amount of intelligence on the human forces and fleets. Heir to the Triclon throne seeks shelter in the Human Empire.

2225 IO – Humanity becomes a member of the Galactic community. This is the year when Lady Athene and Bastee arrive on Earth.

2228 IO – BEGINNING OF EVENTS, REFLECTED IN THE GAME

2228 IO – Events described in the “Privateer of the Empire” book.

Future is uncertain…You shape it!